Sport and Exercise Medicine and Perioperative Medicine a future collaboration 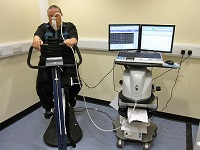 “The concept that exercise is a preoperative medicine is gaining momentum. Appropriate Sport and Exercise Medicine (SEM) involvement could not only reduce patients’ perioperative risk but it could result in a significant improvement in their long-term health if prehabilitation leads to a lifestyle change.”

The perioperative care of patients undergoing major surgery is increasingly recognised as an area that substantially affects public health and for which needs are poorly met. High-risk surgical patients account for 80% of all perioperative deaths (1). Perioperative medicine is the future of the specialty of anaesthesia and aims to deliver the best possible pre-operative, intra-operative and post-operative care to meet the needs of these high-risk patients undergoing major surgery (2).

Cardiopulmonary exercise testing (CPET) has become widely recognised in the United Kingdom as an important preoperative assessment tool for patients presenting for major surgery. There is increasing evidence to the support the use of CPET for perioperative risk stratification and for deciding which patients are more likely to benefit from post-operative critical care. It is not just anaesthetists who have an interest in CPET. SEM practitioners and exercise physiologists have utilised CPET to assess fitness and guide training methods for decades. Is it time to combine the expertise within these two specialities to improve perioperative outcome and patient safety?

Older et al. (3 and 4) published data that showed that patients with an anaerobic threshold (AT) greater than 11ml/kg/min had an improved outcome following major abdominal surgery. They suggested that patients with an anaerobic threshold less than 11ml/kg/min should be managed post-operatively in a critical care environment due to their increased risk. Subsequent studies have shown that CPET can be used to predict short-term outcomes in many different types of major surgery including colorectal, upper gastro-intestinal, bariatric, hepatobiliary and major vascular surgery (5, 6, 7, 8, 9). CPET has also been shown to predict 5-year survival after major surgery (10).

In our hospital we have on average three CPET clinics per week. These clinics are run by a consultant anaesthetist and evaluate the cardiorespiratory fitness of patients due to undergo major intra-abdominal surgery. It is a dynamic test that can be used to quantify an individual patient’s risk and to recommend the most appropriate location for post-operative care (ward care versus critical care). Currently we are testing about 300 patients per annum.

As well as identifying high-risk patients, our CPET clinics provide an important opportunity to assess existing comorbidities and to uncover hidden comorbidities that can impact on their perioperative risk. It allows opportunities for optimisation of conditions such as cardiovascular disease and anaemia, patient medications and appropriate referral for further specialist investigations and management. These preoperative interventions can lead to a reduction in risk during the perioperative period.

Preoperative frailty is a feature of an increasingly elderly population presenting for major surgery (15). Evidence is emerging that the sarcopenia and skeletal muscle deconditioning associated with ageing maybe improved by a combination of aerobic and strength training (16). SEM will be able to provide valuable input into aspects of exercise specificity with respect to goals and short-term targeted pre-operative interventions to improve aerobic fitness.

CPET not only informs us which patients have a reduced level of fitness, it also gives us insight into the cause of the reduced fitness. This may be due to dynamic cardiopulmonary dysfunction or generalised deconditioning. Interest in the concept of prehabilitation or a pre-surgical exercise program is gaining momentum.

A systematic review by Jack et al. (17) looked at prehabilitation in elderly surgical patients. They found that there are a limited number of quality trials in this area and that although we know that fitter patients have a better surgical outcome, a clear causal link between training and improved surgical outcome is yet to be demonstrated. A moderate-intensity endurance exercise program has been shown to be beneficial in individuals awaiting abdominal aortic aneurysm surgery (18), and the feasibility of high-intensity training is currently being studied and may prove to be a safe and time efficient intervention (19). West et al. recently published data showing the benefits of exercise in reversing the negative effects that neo-adjuvant chemotherapy and radiotherapy have on the fitness levels of patients awaiting surgery for rectal cancer. They found that a structured exercise intervention was feasible and returned fitness levels to baseline within six weeks.

Anaesthetists have a very good understanding of physiology and pathology but the decision regarding appropriate training regimens is best made by a practitioner with qualifications in SEM. In our CPET clinic we encourage patients who are deconditioned to improve their physical fitness during the preoperative period but ideally we would have direct access to an SEM practitioner who could prescribe the most appropriate exercise intervention for these individuals. The concept that exercise is a preoperative medicine is gaining momentum. Appropriate SEM involvement could not only reduce patients’ perioperative risk but it could result in a significant improvement in their long-term health if prehabilitation leads to a lifestyle change.

CPET is a useful preoperative tool for assessing patient fitness and quantifying risk prior to major intra-abdominal surgery.

Based in the Department of Anaesthesia at the University Hospital of Wales, Cardiff.

(4) Older P, Hall A, Hader R (1999) Cardiopulmonary exercise testing as a screening test for perioperative management of major surgery in the elderly. Chest 116: 355-62.

(6) Nagamatsu Y, Shima I, Yamana H. (2001) Preoperative evaluation of cardiopulmonary reserve with the use of expired gas analysis during exercise testing in patients with squamous cell carcinoma of the thoracic esophagus. J Thorac Cardiovasc Surg 121: 1064-68.