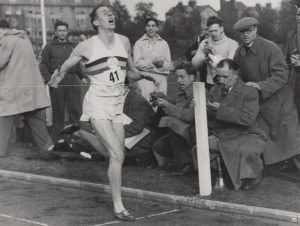 Sir Roger Bannister was the first man to run a mile under 4 minutes, this record time established him as one of the great names of British athletics.

After leaving University College School in London, he went to Oxford University to read medicine before going on to complete his clinical studies at St Mary’s Hospital Medical School in London. Having taken up athletics at Oxford, Bannister used his medical knowledge to devise his own training regime and investigate the mechanical aspects of running.

He was selected for the British Olympic team in 1952 to compete in Helsinki where he finished fourth in the 1500m final, setting a new British record. By the spring of 1954, Bannister was continuing his training preparations for the Commonwealth Games and took to the track at Iffley Road, Oxford, on 6 May running a mile in 3:59.4.

Sir Roger always felt that his achievements on the track were not as significant as his contribution to medicine and medical education both as a consultant in neurology and as the Master of Pembroke College, Oxford.

He became the first chairman of the Sports Council in 1971 and, during his tenure, he led a crusade on drug-testing in athletics. He was knighted in 1975 and made a Companion of Honour in the 2017 New Year’s Honours.