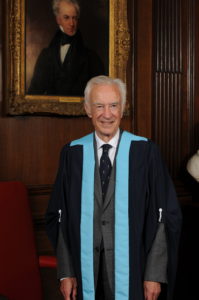 The Faculty was saddened to learn of the passing last night of Professor Donald Macleod at the age of 81.

Professor Macleod was widely recognised as one of the driving forces behind the development of sports medicine in the UK. He also played a pivotal role in the establishment of the Faculty, as chair of the Intercollegiate Academic Board for Sports and Exercise Medicine that would go on to become FSEM.

Professor Macleod was born in Selkirk in 1941. He studied medicine at Edinburgh University and was a consultant general surgeon at Bangour General Hospital in West Lothian from 1975 to 2001, when he retired from clinical practice.

In addition to his surgical career, Professor Macleod had a passion for rugby borne from his playing days as a back row for Edinburgh Academicals. He worked extensively with Scottish Rugby throughout his career. He was Scotland team doctor from 1969 until 1995 and looked after the team at both the 1987 and 1991 Rugby World Cup tournaments. He was also President of the Scottish Rugby Union in 2013-14, as well as President of his hometown Selkirk Rugby Club from 2009 to 2011.

His role in the development of sports medicine in the UK cannot be overstated. As well as chairing IABSEM, Professor Macleod was also President of the British Association of Sports and Exercise Medicine from 1995 to 2002, vice-president of the Royal College of Surgeons of Edinburgh from 2001 to 2004 and served as chair of the medical committee for the Glasgow 2014 Commonwealth Games bid. In 2005, he received the BASEM Sir Roger Bannister Medal for outstanding contribution to sports medicine.

Recognising Professor Macleod’s enduring contribution to the field of sport and exercise medicine, the Faculty is proud to award the Donald Macleod Medal each year to the candidate who achieves the highest mark in the FSEM Membership Examination.

On behalf of everyone involved with the Faculty, we would like to express our sincere condolences to Professor Macleod’s wife Lucile, children Rhona, Torquil and Janette and their families and all his many friends.