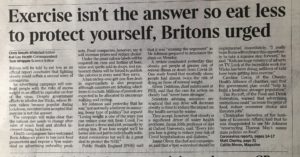 Following the UK Government’s recent announcement of plans to reduce the prevalence of obesity, the Faculty noted with dismay that the importance of physical activity as a factor in managing obesity did not appear to be recognised by some news articles. One headline in particular – “Exercise isn’t the answer so eat less to protect yourself, Britons urged”, which appeared in The Times newspaper on 25 July – appeared to send the wrong message in relation to physical activity in weight control. Faulty President Dr John Etherington, along with Moving Medicine Clinical Lead Dr Natasha Jones, wrote to the newspaper in response. Their letter is published below.

We welcome Public Health England’s efforts to reduce the prevalence of obesity and its detrimental effects on the nation’s health. Their strategy rightly recognises the importance of excessive calorie intake in the development of obesity and identifies that measures to influence the population as a whole must be considered – such as banning junk food promotions. However, all the social determinants of health must be addressed, as obesity is also a disease of poverty and social deprivation. The effects of social deprivation on the health of the population have been examined in great detail in ‘The Marmot Review Ten Years On’. It concludes that ‘the poor diet of people in poverty is, very largely, the result of poverty, not poor choices’. The association between obesity and the incidence and outcome of Covid 19 has brought the consequence of continuing to ignore obesity to the forefront of all our minds.

However, we regret the low emphasis placed on physical activity in the PHE strategy document. Furthermore, the headline ‘Exercise isn’t the answer..’ (Times 25 July) and the subsequent article is dismissive of physical activity in weight control. This, we believe, sends the wrong message. The relationship between physical activity and weight control is complex, and it is clearly not the panacea for obesity, but it is important as the discretionary component of energy expenditure, which an individual has personal control over. Physical activity has positive effects on health, function and well-being beyond weight-loss alone, which is clearly demonstrated in Faculty’s ‘Moving Medicine’ initiative. We believe that to address one contributory factor to obesity without addressing the others, risks failure.

We are unlikely to make significant in-roads in to the current epidemic of obesity – with its dire consequences on future health, well-being and national productivity – without addressing calorie intake, physical activity and the social determinants of health together.