Home > Uncategorised > Camaraderie, an endless supply of shortbread and a team approach!

Camaraderie, an endless supply of shortbread and a team approach! 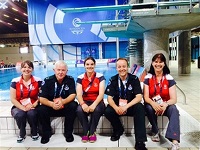 Member of the Faculty, Dr Alethea Beck, writes about her Commonwealth Games experience.

In 2012 I volunteered as a field of play medical doctor and was given the pleasure of covering the Olympic canoe slalom and mountain biking events. This spurred me on to apply as soon as possible to be a volunteer at the Glasgow Commonwealth Games 2014. This time round with more qualifications and experience under my belt I applied for the role of the Sport and Exercise Medicine Doctor. As my base is usually in Edinburgh working as a sports physician I was asked to advise on some of the initial planning for the field of play athlete facilities, including equipment and personnel, as well as facilitating some of the role specific training many of you will have attended prior to your role at the games.

Flexibility is the name of the game when working at a big event. I was originally due to be based at the polyclinic in the athlete’s village and the medical lead for field of play at road events. A couple of weeks before the games I was called and asked if I might be able to cover some events that they were struggling to cover and, as a result, I found myself acting as the SEM Dr for four days at the diving in Edinburgh, three days at hockey and with one day at the marathon and two days at the road cycling events as medical FOP Lead.

As a result I was fortunate enough to experience more of the games than others by being at a number of venues and taking in the experiences from a vast array of people and athletes.  This required the ability to adapt to surroundings and changing teams on almost a daily basis.  One experience that few were able to be a part of was the Commonwealth Games event diving that was based in Edinburgh as opposed to Glasgow. We had a separate athlete diving village and the venue was the Royal Commonwealth Pool in Edinburgh.  I have always felt when covering diving that it is a very supportive community between coaches, athletes and support staff. Again this was shown at the Commonwealth Games 2014.  With any sport there are challenges and in diving this usually presents itself at poolside when lifeguards perform the rescues from the water and hand over to the medical team poolside. At the venue on each shift during training we had two paramedics, two physiotherapists, a sports masseur and myself as the SEM doctor. Alongside this there were four experienced lifeguards on duty for the pool. If you want to demonstrate a multi-disciplinary approach to patient treatment then this is surely it!

Hockey! Wow. What a competition. I had not covered hockey before but had played it lots as a younger person at school and university and let’s just say it has changed-a lot. Daily scenario practice was of utmost importance with this sport. A ball flew close to head height far too many occasions for me to count or be comfortable with. It was imperative to keep your eye on the ball and player. This is where I saw the most injuries unsurprisingly mostly from the ball flying at high speed and contacting something fairly immovable and solid like a bony hand or knee. Again, a team was important and thankfully we had dentists there too.

Finally the road events which included the marathon, road cycling familiarisation and the actual event. I think if you ever had to manage a venue and provide medical support this is one of the most difficult as your venue covers a large area and your athletes keep moving over it at different speeds. Add in the proper Scottish weather (rain and lots of it) which came the second week of the Games and you end up with a very unpredictable environment. I was impressed by the venue medical manager at these events and organisation of personnel was key. There were long days, as I had expected, runners and cyclists like getting up early, so shifts usually begun at 6am!

The things I will remember most about the Commonwealth Games 2014 in Glasgow will be: the camaraderie, the team approach, the chance to network with people who you would not normally meet and of course the never ending supply of shortbread. The key with any of these events and I would encourage you all to do is to take the bull by the horns, enjoy it and take as much from it as you possibly can.