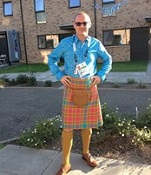 Dr David Pugh, Team Scotland Doctor and Fellow of the Faculty of Sport and Exercise Medicine takes us through his Commonwealth Games experience:

My Glasgow 2014 experience started in 2007 at Cardiff Metropolitan University with my good friend and colleague Dr Mark Ridgewell. My mobile phone went off and when I looked at the text message it was the announcement that Glasgow had won the bid and Mark and I were literally jumping around with glee. Later that day the SEM faculty from the University went out for dinner and surprised me at the end of the night with 6 bottles of champagne for us to celebrate with. I have never forgotten this marvellous gesture and can only hope that the Welsh Team experience in Glasgow was something to remember.

Scotland , as usual , prepared well for the Games with an excellent prep camp at Stirling University campus with most of the 17 sports taking some part in proceedings giving opportunity for that all important team bonding. This hopefully led in some part to the eventual success of the team.

I entered the Village on Sunday 20th July on a glorious day and was met with the wonderful friendliness of the Games Volunteers the wonderful Clydesiders who arranged my transport from Queen Street station and then guided me expertly through the accreditation process. I was met by most of the rest of our medical team in Scotland Street, our home for the next two weeks. The street was bedecked with bunting and posters and looked tremendous in the sunshine. What an entrance!

The Team Scotland Medical set-up was well organised with areas for physiotherapy and private medical consultations split between a portakabin and the ground floor of our house. If anything I think we would have preferred a larger and more open treatment area but sometimes compromises have to be made for the sake of the greater Team and it didn’t adversely affect the medical team’s ability to perform. We were also fortunate to have a portable ice bath trailer with two stainless steel ice baths controlled by our S and C staff on site.

The medical team consisted of 6 docs and 15 physios – our largest ever medical  team, dealing with our largest ever group of athletes numbering some 310, under the control of head doc Niall Elliott and head phyiso Lyndsay Thompson. I feel we had a good mix of experience and youth in the team.

The next day in the Village was marred by the sad news of the sudden death of Professor Stewart Hillis. Stewart was one of my mentors in SEM for many years and I replaced him at his beloved Clydebank FC where he had worked for over 20 years. Stewart was a massive influence on many Sports Docs in Scotland and the UK, it is fair to say that he will be sadly missed.

The Opening Ceremony at Celtic Park was an amazing experience, one that I will never forget and was easily as good as my last one in Melbourne. I was unfortunately unable to join my colleagues in their proud march round the Park as I drew the short straw and had to remain in the Village with the athletes competing the following day. Glasgow, my home city, did us proud and the noise when the Scottish Team entered in their controversial outfits (to coin a Glasgow phrase, I thought they were pure dead brilliant!) was astounding and my family were there to support me as they had done in Melbourne.

All of us in Scotland were praying for good weather as summer in this part of the world can be very hit or miss, luckily the gods were on our side. The triathlon races were held at Strathclyde Park and in 28 degree heat with the water temperature at 22 degrees allowing a non-wet suit swim for the first time at the Park. My preparation with our triathletes consisted of helping blackout logos on kits and spray painting wet suits to satisfy advertising rules! Not a very glamorous part of the remit.

The race itself was fabulous with the Brownlee brothers dominating the Men’s race and a great performance by young Marc Austin, surely one for the future. The Women’s race was equally as exciting, with England again doing well and the Scottish crowd were knowledgeable and supported the Auld Enemy magnificently, which was great to see.

My next sport was Rugby Sevens and when I initially heard that this was at Ibrox, home of Rangers FC, and not Scotstoun, home of Glasgow Warriors and the Scottish leg of the IRB Sevens, I was somewhat concerned. I needn’t have worried as a record 178,000 fans turned out over the 4 sessions and the tournament was a major highlight of the Games for me. Listening to Uganda getting a massive cheer was fantastic and hearing numerous songs sung by 50,000 fervent supporters was simply the best (as they say at Ibrox). We were fortunate to avoid major injuries during the tournament and this led to the match versus England in the lower level play offs. Scotland, unfortunately, were defeated in a close game, which nearly ended on a dramatic high with British Lion and the fans’ favourite, Stuart Hogg, being caught just short of the line preventing the winning score. England held on, but were again given a sporting cheer by the partisan Ibrox crowd.

Although my own core sports weren’t winning medals, they were making friends and entertaining vast crowds. The Scottish Team, however, was delivering in great style in the pool and in the Judo hall. My next core sport was wrestling and, as we hadn’t won a medal in the last 20 years, I wasn’t hopeful. However, I was to be surprised when they won 2 bronze medals; the last one in dramatic style when Alex Gladkov was injured in the first round and required our physio Sandi Lyall to strap his injured knee in the second round. The fight was the best of the whole tournament and the ovation he received on winning, whilst limping badly on one leg, was very well deserved and showed a true fighting spirit.

I must mention the onerous task of accompanying athletes to doping control. I had to do this many times during the Games and, I have to say, I was met with excellent DCO’S who were courteous and knowledgeable in their field and made for unusually good doping control experiences for both myself and our athletes.

On completion of the wrestling I was a ‘floater’ and helped out at boxing and gymnastics. Scotland was very successful in both these sports, adding to our ever growing tally of medals. There were some medical issues in boxing with the removal of head guards due to the increased incidence of concussion. This looks to have led to an increase in cuts. How to treat these with another bout of boxing in 2 – 3 days was a challenge. Initially we were advised that stitches could not be used and so we used traditional ice and then tissue glue. However, it transpired that certain teams were using internal sutures with glue on top and it was eventually discovered and clarified that this indeed could be used.

The polyclinic organised and run by Liz Mendl and the Chief Medical Officer John McLean and his Deputy Johnny Gordon appeared to be highly successful. There was a rapid service with such a huge team of volunteer medical, physiotherapy, dentistry and ophthalmology staff and I believe the statistic show that they made nearly 7,800 consultations – more than one for every athlete at the games! Their efforts have to be highly commended.

One of the fantastic experiences of any Games is the dining hall. In Glasgow this was no exception with the main hall having an excellent selection. My own favourite being curry, which is obviously one of Glasgow’s staple foods. The dining hall experience was supplemented by on site nutritional experts, a nice touch to augment the already fantastic facility. The so-called casual dining was a BBQ facility with lots of tasty treats. The local residential zones also had superb specialty coffees and a selection of tempting cakes. The athletes thirst and hydration was catered for by large well stocked refrigerators filled with sports drinks as well as water and fizzy drinks.

The weather didn’t stay for the whole of the Games and the cycling road races, which I covered on the final day, were marred by the torrential downpours and out of 160 starters only 12 finished.

And then in the blink of an eye it was all over!

The closing ceremony went by in a blur, although Kylie went down well in my opinion, and the traditional Scottish ending was a fitting send off. The after match party at Scotland house went on into the wee small hours and the medics in Team Scotland appeared to party as hard as the athletes.

Then it was nearly time to return to reality.

One more difficult occasion was for myself along with Dr Steve Boyce from Scotland and Dr Steve Chew from England to attend the memorial service for Professor Hillis in our team presentation outfits which seemed an appropriate small gesture to a great man.

On reflection, this was a marvellous Commonwealth Games, with a hugely successful Scottish performance and I hope all that attended were swept away by the sincerity of the welcome, the massive and appreciative crowds and the fabulous and very Scottish Closing Ceremony. I hope that The Gold Coast can deliver a similar experience in 2018 and I wish them every success.