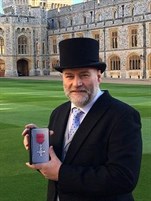 On Friday 8th December 2017 Dr Mike Loosemore, Fellow of the Faculty of Sport and Exercise Medicine (FSEM) UK, recieved his MBE for Services to Sports Medicine from the Queen at Windsor Castle. The Queen’s Birthday Honours list recognises more than 1,000 people for commitment to public service.

Dr Paul Jackson, President of the FSEM (UK), comments: “Congratulations Mike on behalf of our Members and Fellows. This award recognises the work that Mike carries out to ensure high quality medical care is provided for UK athletes and for the general public across all forms of sport and exercise.Mike’s research is not only a great asset to the future development of Sport Medicine, he has also taken on the enormous task of translating it into public health through his work across Exercise Medicine and its relevance to the NHS.”

Dr Mike Loosemore said: “I am delighted to receive this award, it is a real honour to be recognised in this way and I hope it helps to highlight the speciality of Sport and Exercise Medicine and the importance of research to support our sportsmen and women.”

A Consultant in Sport and Exercise Medicine at the Institute of Sport, Exercise and Health (ISEH), Mike treats the general public with musculoskeletal and sports injuries and is also working to promote exercise as a preventative intervention and treatment in many medical conditions.

Mike is also active in various fields of sport and exercise medicine research having published work on various aspects of Sports and Exercise Medicine. In 2011 he was awarded an honorary doctorate in science for ‘outstanding contribution to sport and exercise medicine’ and in 2014 he received the Sir Robert Atkins award for ‘an outstanding contribution to sports medicine’.

Mike is also a Sport Physician at the English Institute of Sport (EIS). He has a wealth of experience across a range of sport as well as supporting teams at major competitions including Rio 2016, where he was Deputy Chief Medical Officer, London 2012 and Beijing 2008, whilst he has supported Commonwealth Games England at every Games since 2002 and as Chief Medical Officer in New Dehli 2010 and Glasgow 2014.

Earlier this year he was announced as Team GB’s Chief Medical Officer (CMO) for the Winter Olympics Games in PyeongChang next year, whilst he currently supports the GB Boxing and British Snow Sports ‘Park and Pipe’ teams.