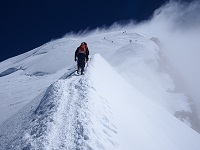 Children on Mont Blanc, the Commonwealth games, and a memorial service for Professor Stewart Hillis

Domhnall MacAuley is a Fellow of the FSEM (UK), CMAJ Associate Editor and a professor of primary care in Northern Ireland, UK.

Taking your nine year old to climb Mont Blanc (altitude 4810m), seeking the record for the youngest ascent, is high risk on a mountain where about 100 people die each year. At what point on the scale of encouragement-to-achieve do we stray into the red zone? Take a look at this clip from ABC News in the US showing Paul Sweeney and his two children aged eleven and nine climbing in the snow and, watch as one child, then another, slip off the mountain. The children were unhurt but the mayor of St Gervais les Bains, which includes Mont Blanc, was highly critical. While there are non-medical questions about who controls the wilderness and when we should intervene when adult behaviour puts others, such as the rescue services, at risk, there are other deeper ethical questions when children are involved.

An underage athlete was also one of the main medical stories at the Commonwealth Games.  Chika Amalaha, a 16 year old female Nigerian weight lifter was stripped of her gold medal when, according to the BBC, amiloride and hydrochlorothiazide, both prohibited as diuretics and masking agents, were identified in her urine sample.

While this clearly transgresses the ethical and legal boundaries, and is particularly serious when it involves a minor, other sporting situations involving children are less clear. To achieve excellence in sport requires immense commitment with intensive skills training from a young age. Children are vulnerable and may well not be making informed decisions for themselves so, although we are generally impressed by outstanding underage performance, we might also sometimes feel uncomfortable.

Other random Commonwealth Games medical thoughts- while I marvelled at English diving sensations Victoria Vincent (13) and Matthew Dixon (14),  on the 10m board, I wondered if repetitive diving risks damaging the developing brain.  I have no idea if there is significant impact on striking the water. (Perhaps someone might respond.) In boxing, blood streaming from cuts made dramatic, if rather unsavoury, television. Amateur boxing has shed head protection making head clashes more likely. Head gear may not reduce repetitive impact but it will reduce potential blood injury. Medicine struggles with boxing. It is difficult to defend a sport where the ultimate aim is to inflict direct injury but the sport is generally well regulated and undoubtedly benefits many young men and women. There is no body contact in squash but the ball is a perfect fit for the orbit and I was impressed with the eye protection worn by squash players in those amazing externally transparent courts. Good sports medicine should be in the background. If it is makes headlines, it usually means there is something wrong so we should acknowledge the outstanding work of the host medical team since among the non-stories were a well contained potential outbreak of gastroenteritis and an Ebola virus scare.

On Monday, as the athletes left the airport in a swirl of bagpipes, we gathered in another part of Glasgow for a memorial service celebrating the life of Professor Stewart Hillis, a cardiologist and one of pioneers of Sport and Exercise Medicine. Long-time Scotland Team doctor, he contributed much to soccer, including introducing cardiovascular screening of referees, worked enthusiastically with UEFA and FIFA medical committees, and was a close friend and confidante of many soccer legends, including Sir Alex Ferguson who gave one of the eulogies. In his academic role, he was a key to introducing the BSc and MSc in sport and exercise medicine to the University, and educating a generation in sport and exercise medicine, many of whom worked on the Games and some of whom came in their team kit. His was a life spent in the service of others – a witty, inspirational, and incredibly committed professional, and a wonderful colleague and friend.